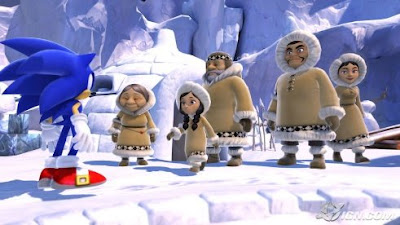 This is a development screen shot of the "Sonic Unleashed" PS3 and X-box360 versions. When this game was made, the company requested a new human design from me. Neither too real nor too Manga-style. At moderate deformation...

The blog by Sachiko Kawamura who is the art director of the sonic team is here. She mention the role of Gurihiru in game.

This game is scheduled to be release in late November.

congratulations~ isn't is great to see your drawings in 3d like that? Well, also it's in a sonic game, how cool! Just from looking at the models I can still tell it's Gurihiru designing!